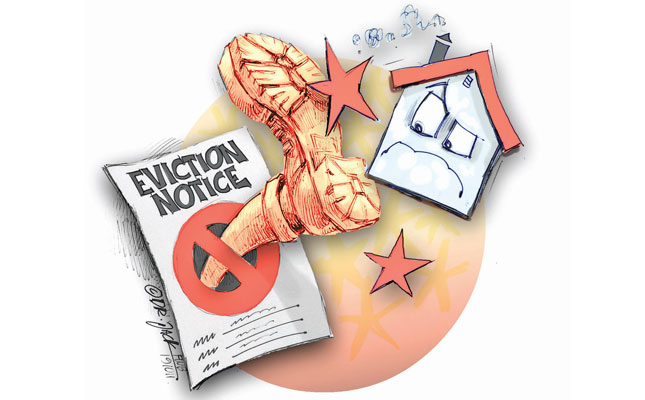 The term ‘eviction’ has become a swear word in certain circles, and some non-governmental organisations are quick to make a connection between ‘bad, unfeeling farmers’ who evict people from farms, leaving them without refuge, and the call for expropriation without compensation (EWC) and security of tenure for farm dwellers.

The reality is far more complicated, and this matter therefore deserves to be viewed from all angles.

Land invasions are of great concern to farmers; certain political parties and other groupings have threatened farmers openly with unlawful occupation of land. It is important to understand the legal framework around such occupation, and especially the rights of the landowner.

Not just a rural problem
There are no reliable statistics for evictions in South Africa, but the perception exists that they occur primarily in rural areas and that farmers are mainly responsible. This is not necessarily true.

All land not specifically zoned for other uses is deemed to be agricultural land. However, this does not mean that all land zoned for agriculture is used for farming purposes.

Much land, especially around cities, is zoned for agriculture, but is in fact used for business or industrial purposes. And many large-scale evictions are as a result of proposed property development and urban expansion.

Lawful versus unlawful
Various laws, including the Extension of Security of Tenure Act (ESTA) and the Labour Tenants Act, make provision for eviction.

These laws contain strict requirements and limited grounds for eviction, and strong protection of the rights of occupiers, even unlawful occupiers.

These people may be evicted only with a court order, after proper notice is given, and all relevant factors, including the availability of suitable alternative accommodation, have been considered.

As court rulings have evolved, it has become increasingly difficult for a landowner to obtain an eviction order. The courts do not issue eviction orders lightly.

In the event of an eviction in terms of ESTA, a probation officer’s report is required, setting out the personal circumstances of the occupiers. A court may grant an eviction order only if it is fair and reasonable to do so, taking all circumstances into consideration.

Previous court judgments have emphasised the importance of alternative accommodation. However, the owner’s rights must also be considered. In the case of City of Johannesburg v Changing Tides 74 (Pty) Ltd & Others (2012), Judge Malcolm Wallis ruled that the landowner cannot be expected to provide free housing indefinitely for members of the community.

In a separate ruling, it was made clear that the owners also had an interest not to be deprived of the land without compensation. In the case of a lawful eviction, the interests of both parties must be fully considered, a process which could take years.

A court normally weighs up all relevant factors before it grants an eviction order. Even then, the order is usually not executed immediately.

An illegal eviction is where people are removed from the land against their will, and without the intervention of a court. This is a criminal offence for which a prison sentence may be imposed.

It may continue only until such time as the state intervenes and provides suitable alternative accommodation. In practice, however, this poses a serious problem, as most municipalities do not have the capacity, or are unwilling, to intervene.

Where the state fails to intervene, the landowner in principle has a claim for Constitutional damages based on the curtailment of his or her property rights.

Municipalities have a Constitutional obligation to make land available for alternative accommodation for people who are evicted.

This has been confirmed in various court rulings, in particular the Blue Moonlight Properties 39 (Pty) Ltd v Occupiers of Saratoga Avenue and Another (2010) judgment, which ruled that this duty includes a responsibility to make emergency housing available in cases where people urgently require alternative accommodation.

In terms of ESTA, a landowner must, under certain circumstances, prove that alternative accommodation is available.

Seen from all angles
It is easy to view the sensitive matter of eviction solely from the perspective of the landowner, or that of landless people who have no housing, or that of the municipality.

And it is easy to become emotional and angry: landowners often suffer losses as a result of land invasions. People who stand to be evicted usually have no safety net and may face a life on the streets.

Municipal officials already feel overwhelmed by the enormous demand for housing and services that have to be provided with limited budgets. This means that everyone has to work together to proactively seek solutions.

Demand for housing near cities and towns is considerable and, since the rapid pace of urbanisation is unlikely to be reversed, we shall continue wrestling with such demand for years to come. Where conflict does arise, timely mediation is likely to be of great assistance in stabilising the situation and finding solutions.

Unfortunately, it is not helpful when opportunists use the thorny issue of housing and evictions to lobby for a moratorium on evictions and EWC. Lawful evictions will always be necessary.

Without this, frustrations will increase, resulting in conflict, hampering orderly housing development and stunting economic growth. But it is also vital to approach any eviction with great circumspection and empathy, and to proactively seek alternative accommodation for the people concerned. Municipalities have an important role to play in this regard.

It is now a criminal offence for a landowner to evict unlawful occupiers without a court order. The Trespass Act, however, still applies, which says it is a criminal offence to trespass on someone’s land without their permission.

However, when trespassing becomes unlawful occupation, a court order is needed to remove such person or persons. Swift action is therefore crucial.

Land invasion or illegal occupation occur when there is a degree of permanency, and where the person has already erected a structure with the intent to stay. When this happens, the person is not merely a trespasser, but an illegal occupier.

Agri SA, with the help of attorneys, has compiled a comprehensive information document on the rights of landowners and the process that should be followed in such cases. It is available to all members, and has been cleared with the police.

Shared responsibility
The protection of property rights and the state’s obligations in terms of land reform and providing access to housing are two sides of the same coin.

All parties concerned have rights, obligations and aspirations in this regard. This responsibility remains vested in the state, as has been confirmed in several judgments. The problem arises when a failing state does not act proactively to make land and housing available, and to act swiftly against unlawful land occupiers.

The views expressed in our weekly opinion piece do not necessarily reflect those of Farmer’s Weekly.

* SD Law, is a law firm specialising in evictions. Our specialist eviction lawyers assist landlords and tenants with the legal eviction process. Contact us for help with the evicting a tenant from residential, commercial, or farm property. Our motto is to respect, recognise and ethically fulfil our responsibilities to both landlords and tenants in the high EQ resolution of the eviction equation. Fairness and equity always.